As a member of numerous ensembles and orchestras, Nenad Marković collaborated with some of the most remarkable conductors and composers of our time such as: Claudio Abbado, Pierre Boulez, Dennis Russell Davies, Peter Eötvös, Helmut Lachenmann, Wolfgang Rihm, George Benjamin, Beat Furrer, Heiner Goebbels and Mauricio Kagel (among others) and has over the years brought over 150 compositions to a world premiere.

Nenad Marković performs on a regular basis with leading contemporary music ensembles such as Ensemble Modern, Klangforum Wien, ELISION, musikFabrik, Ensemble Contrechamps and Athelas Sinfonietta Copenhagen and has been a member of the Swiss-based Ensemble Phoenix Basel since 2003.

​Initiator and co-founder of the international ensemble Laboratorium, which came together at the Lucerne Festival Academy in 2004 under the tutelage of Pierre Boulez. Laboratorium has since performed at major festivals and venues across Europe and the Americas. He also co-founded a Serbian-based Ensemble Studio 6 (alongside the harpist Milana Zarić) in 2012 and has been acting as it's co-artistic director and an executive president between 2012 and 2017, during which period the ensemble realized dozens of programs and collaborations, released 3 CDs and appeared at numerous festivals in Serbia and abroad. He was also a program curator of the 2K+ contemporary music series of the Vojvodina Cultural Institute in Novi Sad from 2015 until  2019.

An avid educator, Nenad has held workshops and masterclasses at numerous music institutions of higher education on the subject of trumpet, free improvisation and advanced playing techniques, directed at brass players as well as composers/arrangers. Furthermore he is a regular jury member at several international competitions for trumpet. 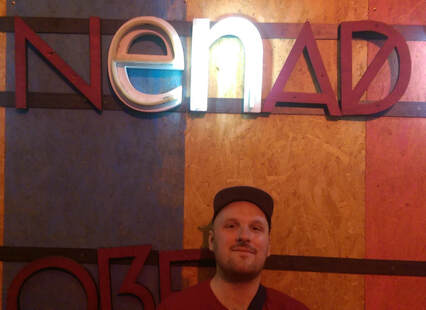 2001 - 2007 studies at the Staatliche Hochschule für Musik in Karlsruhe, Germany in the class of Prof. Reinhold Friedrich (trumpet) and Prof. Dr. Edward H. Tarr (natural trumpet); where he obtained a DKA (an equivalent of Masters’ Degree)
2008 - 2009 postgraduate studies with Prof. William Forman at the HfM Hanns Eisler in Berlin, Germany

Additional education includes work with Gerard Buquet and Mike Svoboda as well as the year-long fellowship at the International Ensemble Modern Academy in Frankfurt (2004-05).

Furthermore, taking part in a long-term "Laboratorium" project, Nenad has had the privilege of working closely with the trombonist/composer Vinko Globokar on several occasions which has been a major influence and a great source of inspiration.

As a student, Nenad Marković was a laureate of several prestigious trumpet competitions, including the 1st Prize as well as the Special Prize of the Audience at the Tromp Muziek Biennale in Eindhoven, Netherlands (2002, the final round included a highly virtuosic Trumpet Concerto by B. A. Zimmermann with the “Het Brabants Orchest” under Michel Tabachnik); Special Prize of the Theodor Rogler Stiftung for the outstanding performance at the ARD Music Competition in Munich, Germany (2003) as well as the 1st Prize at the “BDI” Competition in Kloster Haydau (Kassel), Germany (2002)