OLD VS NEW APPROACH TO DYNAMICS

About six months ago I stumbled onto this video from OrchestrationOnline and the first item on the list (beginning around 1:20) pretty much blew my mind. It’s just a simple tip for composers and arrangers, not even particularly useful to a musician; but it did touch on a subject that I never really thought about before (and probably very few classical musicians do).

How would you visualize the dynamics in a chart or a table? if you look up “music dynamics” on google images, you’ll mostly get pictures like this one I borrowed from wikipedia: 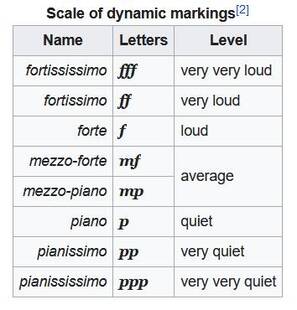 Only rarely are they presented like here, with all gradients of “f” spectrum on one side, and “p” on the other: 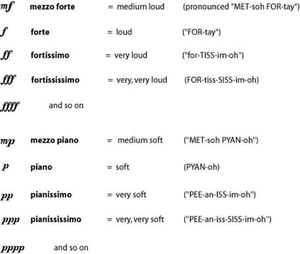 The way I’ve always visualized dynamics is consistent with the image most of us carry in our consciousness: that there’s a normal, central, default dynamic (the “mezzo”), and then there are various deviations from it.

Sort of like a volume fader or a knob on the mixing board which clicks in place when you slide it into the middle - its default position.

For the past two decades I’ve been working mostly within the contemporary music scene; playing XX and XXI century ensemble and orchestral music, and in that context the “fader” approach is appropriate. We have kept the old italian terms for practicality sake, because everyone is used to them; but each dynamic marking in reality doesn’t mean much more than “a certain amount of decibels” and doesn’t expect any particular expression; if the expression is needed it will be written descriptively above the staff.

Back in the XVIII century, dynamics was observed very differently: as a constant game of contrasts, creating pressure and release (such as emphasizing dissonance then resolving it into consonance). It was a way of keeping the musical narration alive and interesting using the same means and techniques that an actor or a storyteller would use: any good public speech varies greatly in dynamics depending on what it's trying to emphasize.

Also, I’m not a linguist but it does seem significant to me that the English language makes a distinction between “dynamics” and “volume”. Maybe those two words are not meant to be used interchangeably after all?

Many written sources from the XVIII century, such as Quantz and L. Mozart wrote about “forte” and “piano” in the context of “light” and “shadow”. So it was not only about the volume: there are two basic contrasting attitudes and an entire palette of colors and expressions around each of them. The volume is just an inevitable consequence of a change in attitude; and the auxiliary letters (mf, ff…) simply mark the extent  (as shown on the second google image above). So, we would have something like:

The switch from the “light and shadow” to the “volume fader” approach happened around the same time as most other major paradigm shifts in music (and not only music) did, which was around the beginning of the XIX century. One reason may be the new prominence of the piano (the instrument); which is more mechanical (with the sound production happening further away from the body) and therefore doesn’t need to think “directionally” in a way that string players do with their bowing or winds and singers with breathing. You may or may not agree with the previous hypothesis; but there is another, much bigger factor which undoubtedly played a role here: the rise of the symphony orchestra and the need to organize sound in a more predetermined way; combined with the newly established role of the “maestro” - the conductor who takes full responsibility over the musical performance, consequently also over the volume of each instrument. Therefore the “volume fader” approach makes more sense for all the larger, conducted groups.

The problem is that playing under conductors has had such a central place in most of our lives as instrumentalists that we have completely brushed aside the original idea of dynamics as a constant motion and the musical composition as the living organism kept in life by this motion. Keeping this in mind will not only make a major difference when you’re performing music from the XVIII century (and before); but also any other more recent solo or chamber music (even contemporary); where there is no conductor and the expression is under your own control.

For wind players there is a commonly used visualization to think outwards vs. inwards; or “to the front” vs. “to the back”. In trumpet methodology this is sometimes used to facilitate and balance the movement between registers; you would visualize the inward movement as you’re going higher and outward when going lower (Pierre Thibaud called this approach “horizontal playing”). We might use the same approach of “inwards” vs. “outwards” thinking when differentiating between piano and forte.

This could instantly make everything sound more interesting; even the mf and mp will have a fundamental difference between them. mf still carries the same meaning as the f and ff, it’s only less pronounced; on the other hand the mp is also a less pronounced realization, but of the opposite meaning.

Now that I think about it, even when warming up or practicing basics on the trumpet there is no real reason to play almost anything in the “neutral” dynamics. Most of the things you practice in a mindless, default “mezzoforte” will probably give you more benefit if played either soft or loud. Tonguing exercises come to mind, also scales, etudes, basically anything from the Arban book… I believe it was Maurice André who claimed to practice in pianissimo 80% of the time, and loud for the rest 20%; but now I can’t seem to find a direct quote anywhere.

It’s a subtle change in thinking, the one that will probably not have any influence on the actual loudness levels of your playing, but will help remind you that the music is never bland, there’s no “average” and the sound is always in motion.

If you’re interested, Thomas Goss of the “orchestration online” has another video on balance where he touches on this subject again, bringing some additional insights (the Rimsky-Korsakov quote is very interesting)